Interview With Chuck Sambuchino (Part One)

Chuck Sambuchino is a funny guy. He’s the kind of guy that you’d like to sit and have a beer with, or wish to have for a next door neighbor. If life were a sitcom, Chuck would be the best friend character – the one that, in the end, always gets all the laughs.

What makes me think this? Well, for one, I had the opportunity to interview Chuck for today’s Fiction Flurry post (part one today, part two to follow on Thursday). And secondly, I have read Sambuchino’s latest offering, How to Survive a Garden Gnome Attack. This is good stuff, people. If you have ever had a garden gnome, or know somebody who has, or even if your only experience with gnomes is that little Travelocity dude, then you need this book. Really. Protect yourselves, get the book, and exercise your right to laugh out loud!

Interview with Chuck Sambuchino (Part One):

I’d like to start with your background. Tell us a little bit about yourself. Where are you from?

Grew up in Erie, PA and went to college at Xavier University in Cincinnati. I live in Cincinnati now with my wife and super-flabby dog, Graham, who enjoys contributing nothing to society all day.

Do you recall how your interest in writing originated?

For as long as I can remember, I have loved telling stories to friends. If something happened with my buddies one night, the next day they would always ask me to tell the story—because I could tell it the best. I guess that was how it all started. In high school, I was writing fan fiction for myself—unaware that it was even called fan fiction.


What inspired you to write your first book?

My first book, technically, was the 2008 Guide to Literary Agents, and that was/is part of my full-time job at Writer’s Digest Books. Once you see your name on the spine of a book, it casts a spell on you. You want to write more. (You can find the 2011 version here.)

Did you just sit down one day and say “I’m going to write a book to be published?”

I’ve always wanted to write, but the type of writing was never an issue. In other words, I just want to write. I’ll write books, articles, plays, screenplays—whatever—it all is a joy.

Do you have a specific writing style?

I don’t know because I don’t really like to dissect my own style (if I even have a “style”), but I would say my writing is kind of sarcastic and dry, and also contains a bunch of pop culture references, even if some are very obscure.

Do you ever experience writer's block? If so, how do you get through it?


I explain my problems to friends at work (who are also editors). We kind of brainstorm how to get through an area. In return, I help them with their books if need be. That’s why it’s important to have writer friends you like and trust.

What were the challenges in bringing this new book, How to Survive a Garden Gnome Attack, to life? 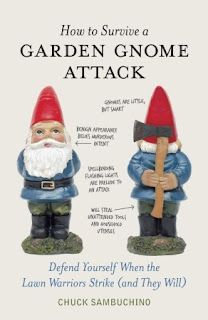 Finding the right blend of humor and seriousness in what was going to be, essentially, a ridiculous, ridiculous survival parody. Also, I was responsible for providing all the garden gnomes that appear in the book’s many color photos. Gnomes aren’t cheap, so I ended up having to drive into a small town in Indiana where a man had a collection of 80 gnomes and was willing to lend us as many as we wanted for several months. He was a godsend.

Have you ever had to put a project away because you couldn’t write it?

Lots. A buddy and mine at my work have come up with 6 ideas for screenplays, but it was the sixth one before we could finish it beginning to end. An idea for a concept of a book or story or article is one thing. Actually filling in the 1,000 blanks in the middle is its own mini-nightmare. My first YA novel is something I had to stop writing—20,000 words in. I just realized the finished product would not be worth it. But all this is what makes writing so rewarding. The fact that it’s so hard is what makes it so sweet when success comes.

Have you ever hated something you wrote and why?

In my years writing, I have written plenty of magazine articles simply for money. For example, I’ve written about golf, Cessna jets, and the layout of new homes—all for a paycheck. I disliked every moment of those articles, but one thing I have learned over the years is that if you want to make a living as a writer, you will write some things for love and you will write some things for money—and that is OK. You need a healthy blend.

Please come back on Thursday for more with Chuck, when he will discuss a little about the Guide to Literary Agents, the publishing industry, and his advice to new writers.

Chuck Sambuchino (visit his blog here) is an editor and a writer. He works for Writer's Digest Books and edits two annual resources: GUIDE TO LITERARY AGENTS as well as CHILDREN'S WRITER'S & ILLUSTRATOR'S MARKET. He is also a humor book writer, with his book, HOW TO SURVIVE A GARDEN GNOME ATTACK, released in Sept. 2010 from Ten Speed Press / Crown. His first book was writing-related: the third edition of FORMATTING AND SUBMITTING YOUR MANUSCRIPT.

He is a produced playwright, with both original and commissioned works produced. His work has appeared in national and regional magazines, with recent articles in Watercolor Artist, Pennsylvania Magazine, The Pastel Journal, Cincinnati Magazine, Romance Writers Report and New Mexico Magazine. During the past decade, more than 600 of his articles have appeared in print. Sorche Fairbank of Fairbank Literary Representation (http://www.fairbankliterary.com/) is Chuck's literary agent. To read his blog, visit www.guidetoliteraryagents.com/blog.

Besides that, Chuck is a husband, cover band guitarist, chocolate chip cookie fiend, and owner of a flabby-yet-lovable dog named Graham.
Posted by Beth Zellner at 9:20 AM