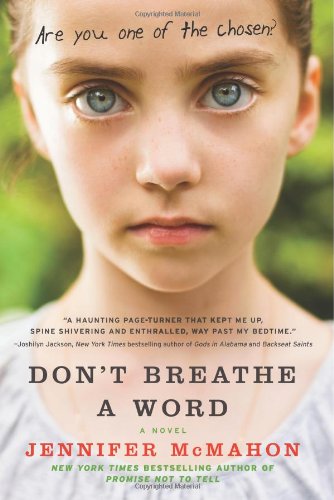 I recently had the opportunity to read Jennifer McMahon's new novel Don't Breathe a Word, which was released today.

"On a soft summer night in Vermont, twelve-year-old Lisa went into the woods behind her house and never came out again. Before she disappeared, she told her little brother, Sam, about a door that led to a magical place where she would meet the King of the Fairies and become his queen.

Fifteen years later, Phoebe is in love with Sam, a practical, sensible man who doesn’t fear the dark and doesn’t have bad dreams—who, in fact, helps Phoebe ignore her own. But suddenly the couple is faced with a series of eerie, unexplained occurrences that challenge Sam’s hardheaded, realistic view of the world. As they question their reality, a terrible promise Sam made years ago is revealed—a promise that could destroy them all."

I found this book to be incredibly captivating. I enjoy mysteries and I enjoy fairy tales, so this is an interesting mash-up of the two. Told in alternating chapters, there are essentially two storylines--what exactly happened the summer Lisa went missing, and the adventures of Phoebe and Sam fifteen years later.

This is certainly a dark book and things are never what they seem. There are so many twists and turns in the plot that it's impossible to get bored or, frankly, to put the book down at all. The characters are vivid and the mystery itself is well thought-out and complex. The story harkens back to the age of fairy tales and playing make believe, but the dark twist to it gives it a wonderfully unnerving quality.

I'm always drawn to covers, and this cover is absolutely gorgeous. It definitely sets the tone for the whole novel in the both innocent and haunted qualities of the girl. Another feature of the book I enjoy is the passages from the "Book of Fairies" at the beginning of each part. These passages offer an intimate look at the world Lisa believes in.

I truly enjoyed Don't Breathe a Word. If you're looking for a good mystery to read this summer, I would suggest you check out this one!
Posted by Erin Millar at 6:38 PM