It's not just any Miscellaneous Monday here at Fiction Flurry, it's Memorial Day.  It is hard for me to comprehend the selflessness and courage willingly given by millions of our service men and women, past and present.  I have extended family in the military, but none in my immediate family serves.  When I try to imagine what it might be like to have a close family member in the military, I'm not sure I could handle it.  The families of military members deserve a hearty "thank you" as well.

Since this is a blog about writing, I thought I might highlight some books written by American military members.  Military stories, true or fictionalized, make for great suspense, heartache, tragedy and triumph. 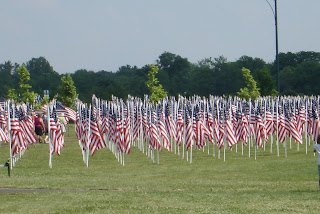 Here are some books that caught my interest that you may want to check out too.  The summaries are taken from Amazon.com.

Back in Action: An American Soldier's Story of Courage, Faith and Fortitude by David Rozelle
From the Inside Flap:


They put a price on his head. They did everything they could to disrupt his mission. Finally, when an anti-tank mine tore off his right foot, the warriors of jihad in Iraq thought they had neutralized one of their most resourceful, determined foes.

They were wrong.
Refusing to let his injury stop him, Captain David Rozelle roared back into action, returning to Iraq as commander of an armored cavalry troop. He became the first amputee in recent military history to resume a dangerous command on the same battlefield.


As Commander in Chief of the United States Central Command from July 2000 through July 2003, Tommy Franks led the American and Coalition forces to victory in both Afghanistan and Iraq. Unsurprisingly, the portions of American Soldier covering these wars are the most interesting because they combine military maneuvers, political wrangling, and lots of action and commentary. This does not mean, however, that the rest of his autobiography is dull. General Franks's writing is clear and engaging and his insider's perspective is informative and interesting, particularly when he explains how the military moved into the 21st century by emphasizing speed, agility, and better cooperation among the various branches--a significant shift from the first Persian Gulf war just a decade earlier.

In addition to his years as a war general, his memoir also covers his childhood, his early years in the Army, his tours of Vietnam, and how he contemplated retirement before being called up as commander of Central Command, "the most diverse, strategically vital—and unstable—region of the planet." Ever the diplomat, General Franks offers insights, but little criticism of individuals. Other than expressing admiration for his own staff and for President Bush and Defense Secretary Donald Rumsfeld in particular, he is tight-lipped about any conflict within the administration that may have occurred regarding policy issues. (The one exception is counterterrorism specialist Richard Clarke. "I never received a single operational recommendation, or a single page of actionable intelligence, from Richard Clarke," he writes). He also writes that he was surprised by the absence of weapons of mass destruction in Iraq and that no WMDs were used against American troops. Still, the invasion of Iraq was justified in his eyes: "While we may not have found actual WMD stockpiles, what the Coalition discovered was the equivalent of a disassembled pistol, lying on a table beside neatly arranged trays of bullets." American Soldier is a compelling look at the war on terrorism from one who served on the frontlines as both a warrior and a diplomat. --Shawn Carkonen

Kill Zone: A Sniper Novel by Sgt. Jack Coughlin and Donald A. Davis


Coughlin wrote with Davis on Shooter, a memoir of Coughlin's career as a Marine Corps sniper. In the team's debut novel, the two pit Gunnery Sgt. Kyle Swanson, the corps's best sniper, against a secret alliance of government and business bigwigs. A triumvirate of National Security Adviser Gerald Buchanan, Senate Armed Services Committee chair Ruth Reed and megarich businessman Gordon Gates IV are using Gates Global (the world's preeminent private security company) to implement a plan to take over the military, rewrite the Constitution and usher in the creation of a New America. In Saudi Arabia, Marine Brig. Gen. Bradley Middleton is kidnapped by two mercenaries working for Gates Global. After Swanson is chosen to be part of a rescue team, helicopters carrying the rescuers crash on landing, and Swanson is left with only his exceptional combat skills and his high-tech rifle, Excalibur (a sniper's wet dream). The action reaches such a furious pitch that readers will hardly notice an overly romantic subplot or the clumsy machinations of the evil trio. (Nov.)

Copyright © Reed Business Information, a division of Reed Elsevier Inc. All rights reserved. --This text refers to the Hardcover edition.
Posted by Rachel Dilley at 12:14 PM