Having just returned from vacation, I am sad to report that I didn't write a bit over that entire week, save for one blog post.  The good news is that I was able to squeeze in some on-site research for my novel in progress.

On our way home from the beach we stopped at Monticello, the home of Thomas Jefferson. A pivotal scene from my novel-in-progress takes place at the Monticello Cemetery.  I had traveled to Monticello about 6 years ago, but only saw the cemetery from the bus.  When writing the crucial scene involving the cemetery at Monticello, I drew from my memory and from pictures that I was able to find online.  I thought I had the scene as accurate as could be until I actually visited the cemetery this week.  I looked at Jefferson's burial plot from every angle, noticing the kinds of trees surrounding the grave, the thickness of the iron fence surrounding the cemetery, and the enormity of the obelisk-shaped monument on top of Jefferson's resting place.

As it turns out, the way I had written the cemetery scene would not really be plausible, and it took an on site visit to realize it.  The way I had originally written the scene involved flooded ground and an uprooted tree causing the monument over Jefferson's grave to shift.  After seeing the grave in person, I'll need to rewrite the scene with a lightning strike causing a tree to fall into the monument, knocking it over.  A few displaced tree roots could not cause the damage to the monument required by the plot of the novel.

Another benefit of my visit to the place where much of the action in my novel occurs is that I will be able to add in another layer of accurate detail, allowing my readers to feel as if they were there.  If readers actually do visit Monticello, they'll be able to see that I've done my homework.  Take, for instance, the imposing crest adorning the wrought iron fence surrounding the cemetery, pictured below.  This formidable --dare I say "haughty"-- crest plays right into one of the themes of the novel, the duplicity of well-intentioned aristocracy. 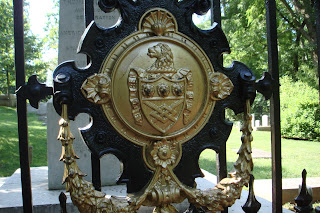 Yet another detail gleaned from my visit will serve to highlight issues of race in my book.  Only the descendants of Jefferson by his wife, Martha, are permitted burial in the plot.  Though the Thomas Jefferson Foundation finds it it highly probable that Jefferson fathered at least one if not all of his slave Sally Hemings's children, the  Monticello Association, the descendants who own the cemetery, is not so convinced.  They do not permit the Hemings descendants cemetery privileges.  See the picture below.  The sign doesn't announce "no Hemings allowed," but it's no secret either, as made clear by the shuttle bus driver on our way down the mountain to the visitor center. 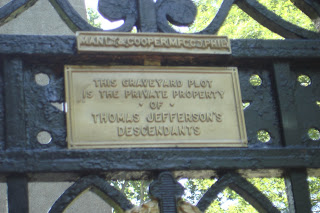 I don't consider my novel to be historical fiction, though many details from American history do come into play.  I owe it to my readers to be as accurate as possible when describing real places and people.  Research online can certainly get you headed in the right direction, but there's nothing like investigating your topic in person to get it just right.  Additionally, actually being there gave me inspiration and ideas to propel my book further than would have otherwise been possible.  It's good to put away your laptop and take a road trip every once and a while.
Posted by Rachel Dilley at 7:00 AM